Truck Accidents Are on the Rise – Do You Know What to Do if a Trucker Hits You?

It is everyone's worst accident scenario: colliding with a massive tractor-trailer. The unequal match in weight and power causes these accidents to frequently result in very serious injuries or fatalities.

And they are happening more often. If you have been injured, please click here to contact a Truck Accident Attorney in NC.

Earlier this year, a North Carolina deputy released a statement of gratefulness to a police officer from Virginia who saved his life. The deputy accidentally drove his cruiser underneath a tractor-trailer loaded with plywood while responding to an emergency call.  The Virginia officer was off duty but nevertheless used the deputy's radio to call for help and, with the help of another man, pulled the deputy from his patrol car just as it began to catch fire.

The deputy escaped with a broken left hip and right knee from an accident that could have been much, much worse.

Unfortunately, this is not always the case. The DOT recently reported an increase in the number of deaths after tractor-trailers collisions.

In a recent tragic example of what can happen in a tractor-trailer accident, a chartered school bus and FedEx truck burst into flames after colliding, killing 10 people. The FedEx truck also jumped an interstate divider, injuring 30 more people. Both the bus and truck driver were killed, along with five students and three chaperones, Reuters reported.

According to the LA Times, three lawsuits have been filed against FedEx -  two wrongful death suits by parents of students who died, and one personal injury lawsuit. 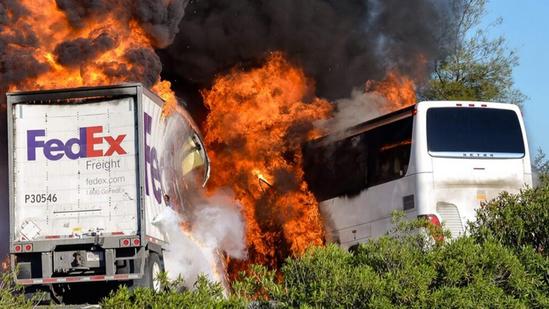 The FedEx truck and school charter bus from the tragic accident in California. Source: LA Times

While this example is tragic, it also shows the devastating potential of large trucks.

In even more alarming news, according to recently released DOT statistics (2012) there has been a 4% increase in fatalities from accidents involving large trucks over the prior year. In 2012 alone, 3,921 people were killed and 104,000 injured in collisions with large trucks.

There is no clear explanation for the increase in tractor-trailer accidents, but the possibility for tragic injuries and fatalities is more likely when these large vehicles are involved.

It is hard to protect yourself on the road from tractor-trailers, but finding representation after an accident with a tractor trailer can help ensure that your rights are protected.

Why Hire a Truck Accident Attorney in North Carolina?

Due to the grave nature of trucking accidents and their complexity regarding insurance coverage, it is important to take action quickly and proceed with caution. Seeking representation immediately can be beneficial in many ways.

If you've been injured in a truck accident, call the Law Offices of James Scott Farrin at 1-866-900-7078 or visit www.farrin.comright now for a free case evaluation.